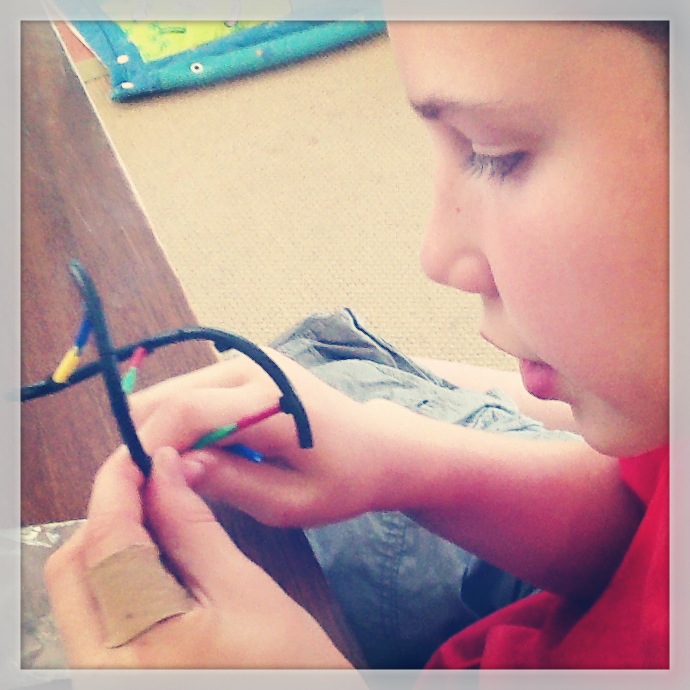 Please tell me I'm not the only mother who's had this moment:

It's Sunday morning, five minutes before you have to leave for church. As you're collecting snacks, kids, diapers, a sippy cup, a blanket, and ohmygosh I almost left the house in my slippers, you notice it.

That one kid-- you know, that one-- is wearing high waters. Stained high waters. And clearly, his shirt is just a bit too tight. Which could almost be ignored ... were it not for the missing button.

Did I mention the whole family is going to lunch with perspective missionary partners after service?

Tell me you've had that moment, or something like it. And tell me that in that same moment, your husband looked at you and asked, "Uh, does he have anything that fits?"

This was me Sunday before last, gazing at my sweet, doe-eyed Logan, who just didn't get what all the fuss was about. In the eyes of a 10 year-old boy, he was perfectly presentable. Fancy, even.

It's been lovely, this past week and a half, to see such a neat, tidy version of Logan. Clean, crisp shorts. Neat, colorful shirts. So fresh and well, un-Logan like.

And then, this morning--

I pulled Logan's new khaki shorts from the dryer. The ones I had to buy brand-new from Old Navy. The ones that cost as much as the ones we'd buy for Mr. Blandings, even on sale.

And there, right across the seat, was a massive, unmistakable grass stain.

I sighed. I bit my tongue.

Then I crept upstairs and nabbed a fresh pair of shorts and a nice new polo shirt, and I hid them in my closet. Because, by golly, I won't tell a boy not to play outside, or to paint, or to muck about with clay or any other messy stuff.

But I also need to have him somewhat presentable sometimes, right?


Seven is two and a half.

A toddler, yes. But more and more a preschooler. Every day she spots a letter or number and asks, "What does that say?" She pretends with her babies and animals and big brothers, and it is real pretend play-- the kind where things must be just right, where reality must be as closely mirrored as possible. Unless, of course, she's pretending to be something with no basis in reality whatsoever. In that case, anything goes.

Because she is, still, a toddler.

I'm so, so looking forward to homeschooling this child. Her personality, her passion, and her curiosity make me eye the Sonlight cores that have been patiently waiting in our school room with longing. To revisit so many old friends with a child already so hungry for the adventures that she finds between the pages of books will be a pleasure. She is the perfect candidate for a Sonight education. She loves to be read to, remembers every detail of every story, and asks questions about everything. Her enthusiasm, I know, will carry wiggly, wily, non-stop Mani along, and even inspire dreamy little Oli to pause and drink in what he can take of the tales.

I look at my three little ones and imagine the afternoon when Seven turns to Mani and says, "Let's play New Toes for Tia." Then I picture the day I realize that Reuven knows all the countries of Eastern Europe but cannot tie his shoes, or that Oli learns about the Civil War just because it was part of a story we read together as a family.

I look ahead and look backward at the same time. Haven't I been here before? Oh, yes, I have. Those memories are, I think, what makes the anticipation of the coming season that much sweeter. The days of Logan fiddling with Legos while I read The Great Wheel, the afternoons where Jo poked grass seeds into pots of squishy soil, the mornings with Atticus on my lap as we paged through the Egermeier Bible .... those were precious times that I hold dear to my heart-- and times that have set the stage for all of the things that have come after. The fast-forward track to midwifery. The love of music. The passion for science. The desire to pilot planes.

Mani will be five in June, Seven is two and a half, Oli six. Reuven is still a four month-old nursling. I remember so well the magic of these days-- when it was Jo who was five, and Atticus and Logan were sweet little tagalongs at three and one. I remember the idyll of those first read-alouds, the stress of worrying over whether or not I was neglecting my baby by spending so much time aiming above his head, the juggling of adding in more purposeful learning activities alongside laundry and cooking and check-ups at the doctor. I recall the rush of saying it out loud: "We're homeschooling." "She's homeschooled." "Actually, we homeschool."

They were heady days, to be sure.

This time around, I am not incorporating something new into our family routine. Oli, Mani, and Seven have enjoyed "table time" since they were old enough to occupy the bouncy seat that has been perpetually perched on the end of our dining room table for the last 5 years or so. They have sung Bible songs nearly every weekday morning since they could manage to lisp, "Da B-Y-G-I'm me!" (Mani's first attempts at "The B-I-B-L-E."). They adore story time, be it with silly rhyming tales or coffee-table spreads of African lions. They paint, they model with wax, they look forward to sunny days when they can be rabbits and foxes on the back hill.

So, really, they're already homeschooled--by my definition at least.  But soon, they'll be ready for something entirely new to them. Something that won't feel like "school" at all, but which will expand their repertoire of imagination, excite them with glimpses into the bigger world, and ignite in them a greater love of God's creation.

I am thrilled to throw open the doors yet again for a new set of learners, even as I help my older kids find their way towards their callings. Ah, what beautifully full days!
Posted by mary grace at 1:24 PM 2 comments:

The privilege and the burden 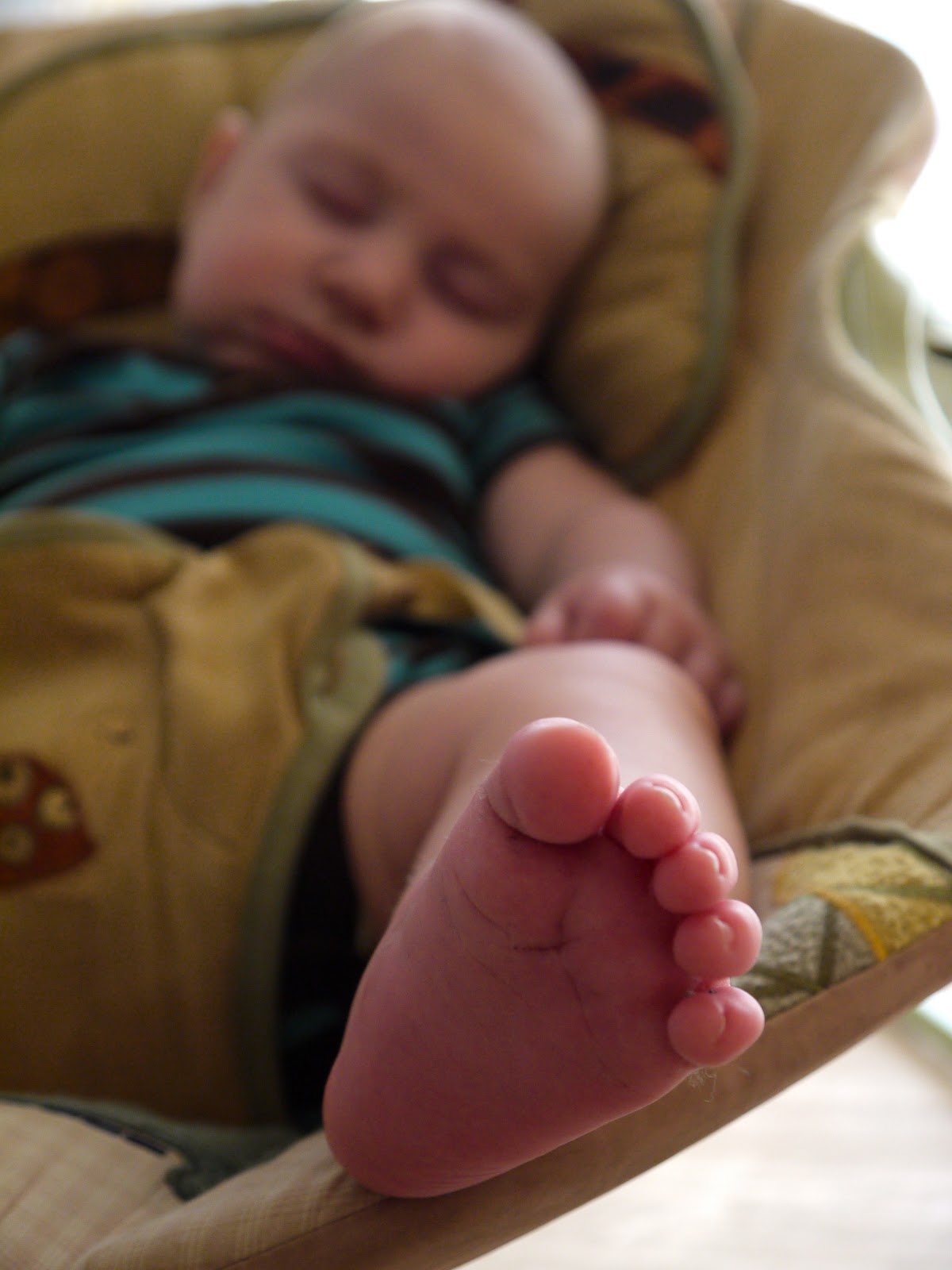 Whenever the world is rocked by shocking atrocity-- which happens, it seems, all too often-- I find myself drawn not just to the comfort of my family and home, but also to the knowledge that I am doing something.

With every diaper I change, every smile I offer, every question I answer, every book I recommend, every good habit I encourage, every meal I serve, every story I tell, every hurt I soothe, every song I sing, every choice I explain, I am doing something of infinite, eternal value.

I am a peace activist. A teacher. A nurse. A judge. A mentor. A discipler of such varied arts as one person can possibly muster. I am the one who points out the wrongs and applauds the rights. I am the champion of justice, the voice of reason, and the hero of the underdog.

I nurture the minds, bodies, and spirits of children who will impact the future of this world with their passions, talents, and gifts. I multiply my own gifts to this world exponentially with every little person entrusted to me. It is a privilege, yes. But it is a burden as well.

Because the future, clearly, needs people of purpose, people of love, and people whose faith leads them to gentleness. Until Jesus returns, it is our job to lead children to this water. We cannot, of course, make them drink. But we can offer it up, model it, and make it irresistible.

We can do something. Simply being a mother ... that, I think is the most powerful thing.
Posted by mary grace at 4:35 PM 1 comment:

One step at a time

But tomorrow, the footprints get a little bit clearer on the path God marked "Jo" before time began.

Tomorrow, she begins training to become a birth doula, with an eye towards serving as a midwife.

Oh, delicious irony: my least worn child, the one who slept in a crib in another room at 4 weeks, the baby I abruptly weaned at 13 months, my disposable diaper wearing, ramen munching baby ... a doula.

For so many years, it was animals, animals, animals. And then, one day, all of that sweetness and nurturing just clicked over. The dream of being a vet slowly receded, and in its place there was this: the simple desire to be part of the beautiful, amazing process of birth. The desire to comfort and assist. The desire to witness life's first breath.

On having one's hands full 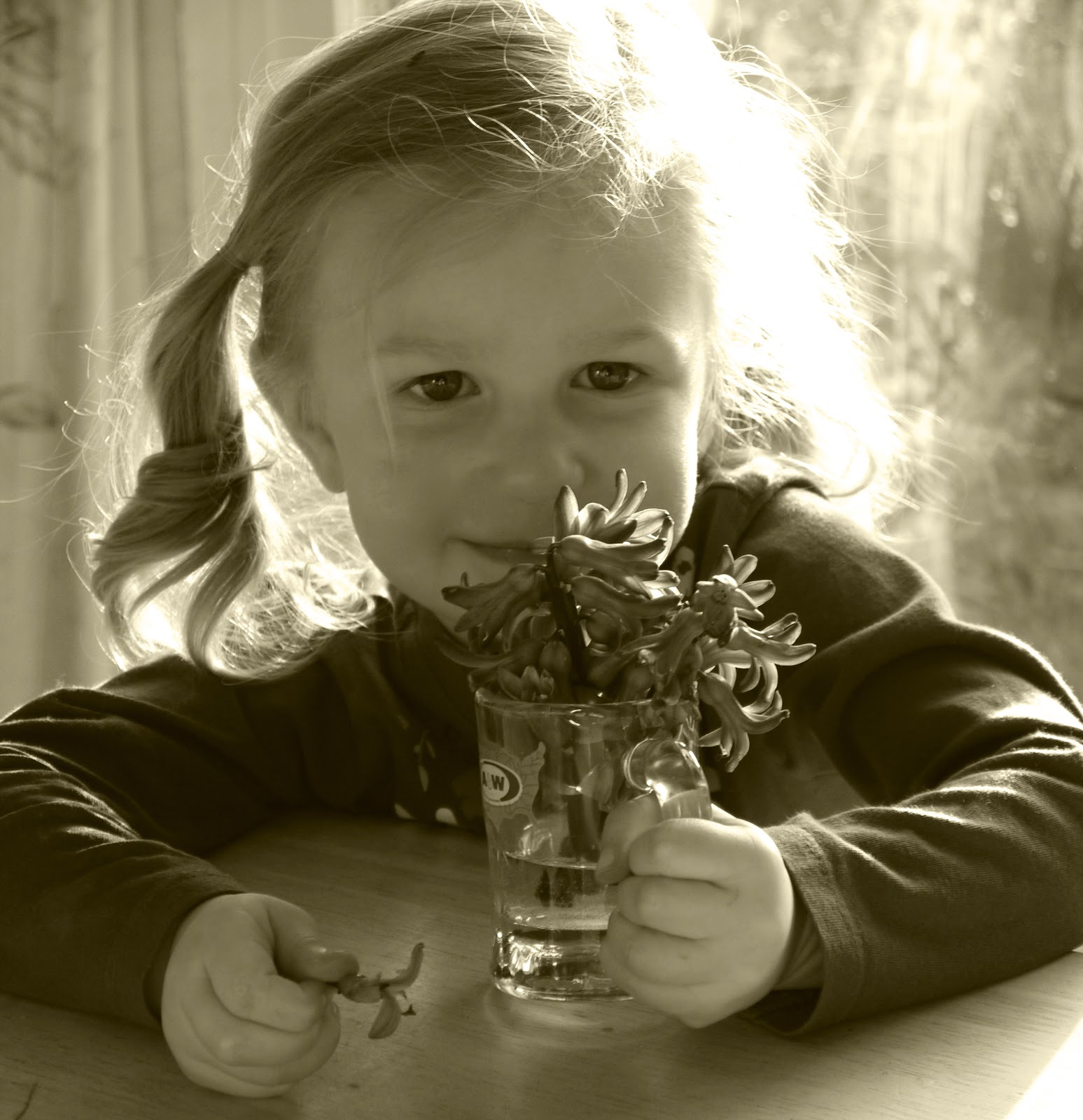 The things folks say to Mr. Blandings and I are pretty much what you'd expect.

Do you ever get any sleep?

I guess you're used to it.

How do you ever get anything done?

Do you live on a farm?

How old will you be when this one graduates?

I bet you never get any alone time.

Is this your last one?

Your house must be chaos.

It's typical stuff, and anyone with any number of children has probably heard it all before. I fall into the camp of believing that most of the people, most of the time, mostly mean well. Yes, I wish people wouldn't share their observations in front of my children. And yes, I've had a few less than WWJD moments where what came out of my mouth probably did more harm than good for the cause of large families everywhere.

But by and large, I try to give people the benefit of the doubt. Just as the people spouting the pithy-isms usually have no idea of where we've been and how we got here, I also rarely have more than a moment's glimpse into the full story of their lives. Assuming ill intent (or stupidity) is just plain unfair.

And you know, some days I do have my hands full. So there's always that.

There are tons of blog posts, articles, and memes snapping back at the people who want to know if, you know, they're all yours. And they're funny stuff, if I do say so myself. Cute, snappy, "Man, I wish I had thought of that when ..." stuff. Having actually been asked if I had taken neighbor kids with me to the grocery store before, I do see the absurdity (and humor) inherent in being a large family in a small family world. Going out in public is often a foray into a potential minefield of dropped jaws, if you know what I mean.

But on a day to day basis, I don't go out into the world armed with comebacks. I don't look for opportunities to evangelize folks on the merits of more than one or two children. And, as someone who languished in a painful season of infertility and longing, I never, ever tell people that I am blessed or just following the Lord--because while it is absolutely true, the inferred connotation to others is that they are not blessed, and they are not following God. Try that zinger on for size and see how Christian it feels.

So what do I say? In the library, when someone has just stopped us in the video section and manually counted each one of my children, then pointedly asked if there are any more lurking in the stacks? Or as we're loading into the van, and someone slows down to gawk, then asks if I know what causes that? Or when a young lady beams at my baby and asks if he's my first, only to open her eyes wide as I give her the full head count?

What do I say?